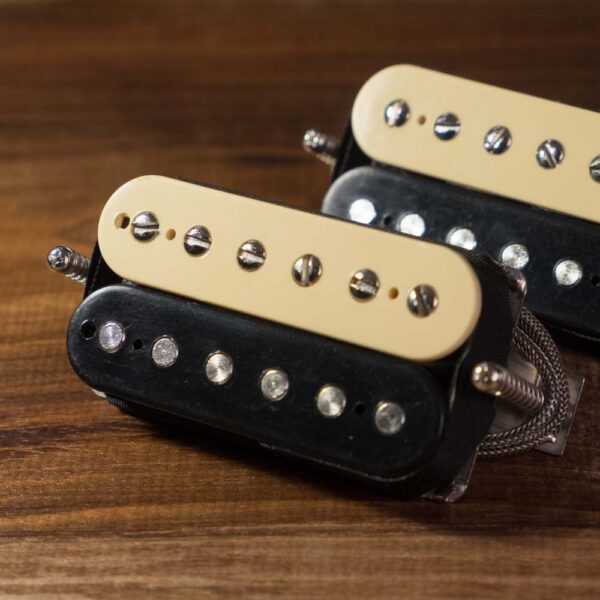 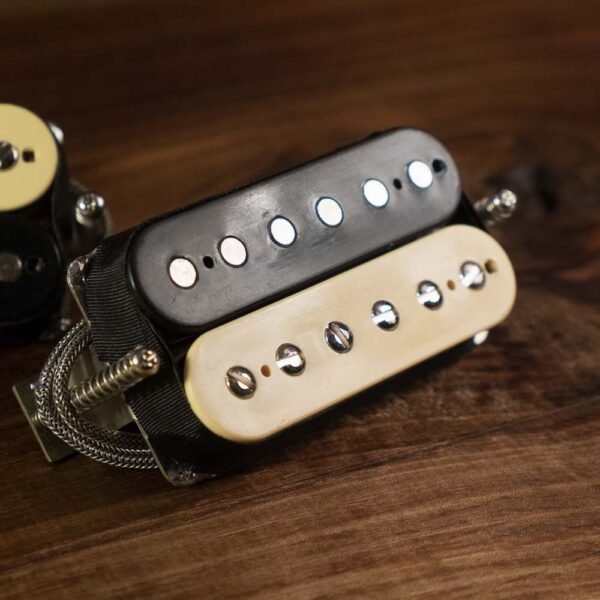 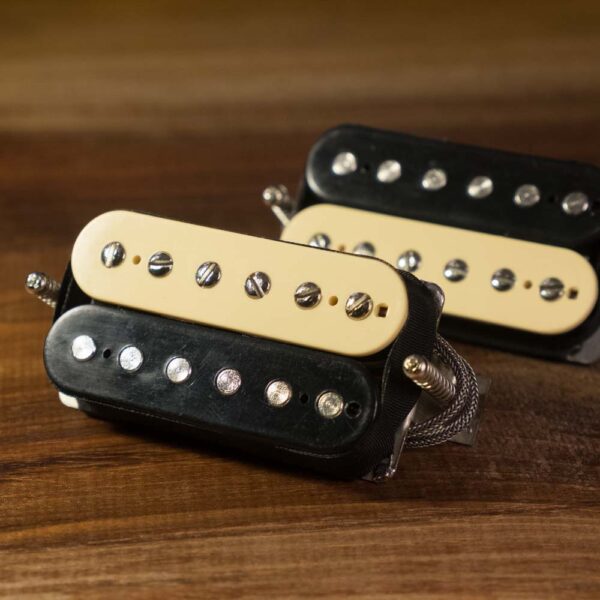 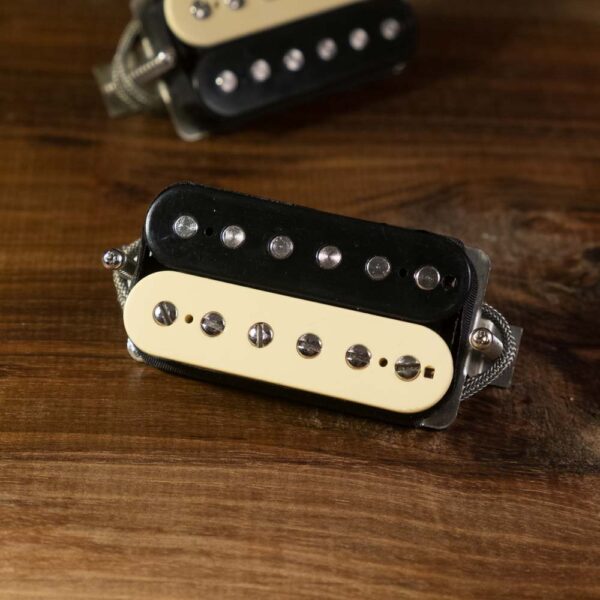 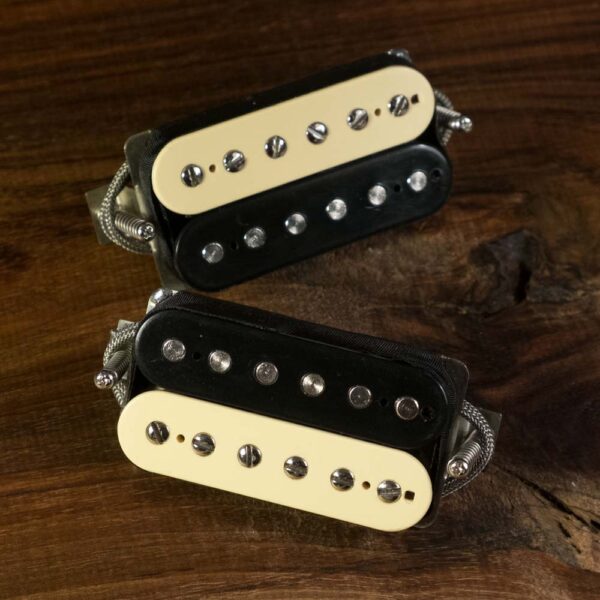 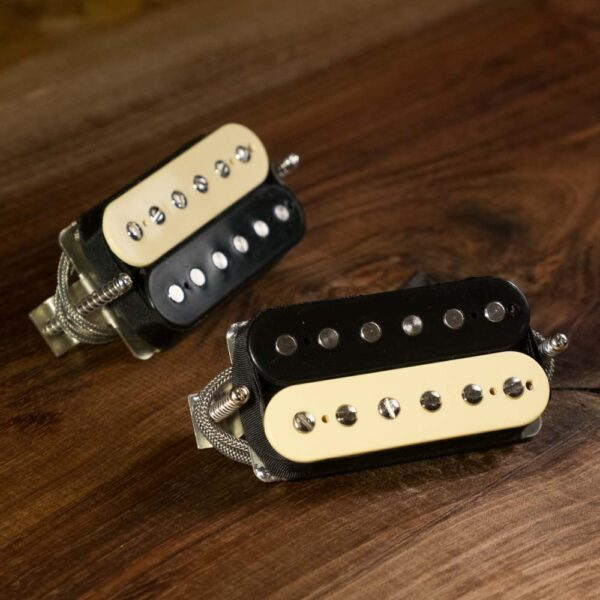 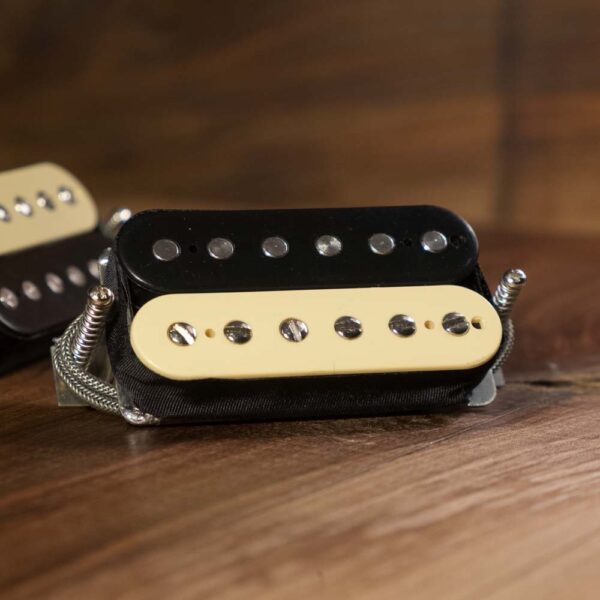 This new collection of PAF Humbucker pickups are replica pickups as they were made in the 50’s and 60’s. Parts are imported from the USA to ensure traceability, vintage accuracy and excellent build quality.

This new collection of Vintage PAF Humbucker pickups are replica pickups as they were made in the 50’s and 60’s. Parts are imported from the USA to ensure traceability, vintage accuracy and excellent build quality.

The steel used for the screws and inserts is type “1010”. It is the steel with the least carbon content and which conducts magnetism better. The heads of the screws are slightly lower than the modern ones.

The coils, modeled after coils from the 1950s, are made of butyrate. It is the same plastic that was used at the time. It has a matte finish with asperities and has a very particular smell recognizable above all. It has an organic look that has nothing to do with modern ABS coils.

The magnets, Alnico 2, 3, 4 or 5 used in these different models are raw, unpolished. They do not have the same power as polished magnets, retaining less charge than the latter.

The winding wire is Plain Enamel, the same thread used in the 50s and 60s. The formula has been slightly improved to make the enamel stronger. The ancient enamelling, consisting only of oil and resin of Abrasin or linen was brittle and resisted badly to temperature changes. The addition of a tiny dose of Polyurethane made it possible to strengthen the enamel, while retaining the original physical qualities.

The PAFs of the 1950s and 1960s could be very different from each other. Indeed the production was not calibrated as it is today. So we could have two completely different guitars in terms of sound. The magnets for were to be different as well as the winding. That is why we offer different PAF Humbucker models, models we could find back then.

What our customers say

Any cookies that may not be particularly necessary for the website to function and is used specifically to collect user personal data via analytics, ads, other embedded contents are termed as non-necessary cookies. It is mandatory to procure user consent prior to running these cookies on your website.